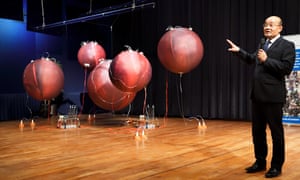 Artificial womb to be developed for premature babies

A €2.9m grant has been awarded to a consortium in the Netherlands to fund the development of an artificial womb to support premature babies.

‘An artificial womb would be a gamechanger,’ said one of the key researchers Professor Guid Oei at Eindhoven University of Technology. ‘Our goal with the artificial womb is to help extremely premature babies get through the critical period of 24 to 28 weeks. With each day a fetus of 24 weeks continues to develop in an artificial womb, the chances of survival will increase.’

In 2017, researchers reported growing premature lambs in ‘biobags’ which supported their ongoing development. The consortium plans to make a significant advance on current technologies by creating an artificial womb that more closely resemble conditions in the womb, allowing premature babies to develop to term.

Professor Frans van de Vosse, project coordinator at Eindhoven University, explained: ‘Premature babies are placed in a fluid-based environment, just like the natural womb… Oxygen and nutrients are provided via an umbilical cord using an artificial placenta. The system that makes this possible constantly monitors the baby’s condition. Think of heart rate and oxygen supply, but also of brain and muscle activity. Smart computer models that simulate the baby’s condition provide the doctor with immediate support in the decision-making process with regard to the artificial womb’s settings.’

Over the next five years, further research and testing will be carried out to develop the prototype using 3D-printed replicas of human babies and sensors to recreate all aspects of the womb, even down to the maternal heartbeat. ‘When they are in this environment, they just feel, and see, and smell, and hear the same sounds as when they are in the womb of the mother,’ said Professor Oei.

Elizabeth Chloe Romanis, a lawyer at the University of Manchester who has explored the bioethics of artificial wombs, warned that the technology could raise questions.

‘It is clear that the legal and ethical issues emerging from the technology must be talked about now, in advance of the artificial womb becoming a reality,’ she told the Guardian.

Approximately one in 13 UK babies are born prematurely and globally over 1 million babies die each year as a consequence. Those that survive often suffer from organ complications such as chronic lung disease and have an increased risk of disability.